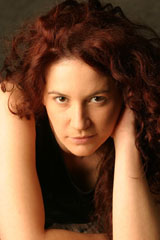 Silvana Luppino was born in Reggio Calabria.
She graduated in acting in 2000 at the Accademia D’Arte Drammatica della Calabria (Palmi), by the artistic direction of Luciano Lucignani.
Her teachers were: Paolo Giuranna, Franco Però, Giovanni Diotaiuti, Silvia Vladiminsky.
She improved her studies attending some workshops held by Steven Berkoff, Marylin Freed, Nikolay Karpov, Silvia Vladiminsky.
In 2011 she attended a workshop about the techniques of the Theatre of the Oppressed with Rui Frati – president of the Theatre de l’Opprime in Paris. During the same year, she took part at the play of theatre –forum “Pari & Dis-pari”, directed by Irene Zagrebelsky, which premiered during Esperienza Italia - Biennale Democrazia –Torino.
Within the last thatre works: “L'altra metà della mela” by Enzo Consoli, directed by Christian Maria Parisi, ”Le Confessioni” directed by Walter Manfrè and the play by Paola Ponti “Traditi”.
She is currently working on the engaging monologue “Anna Cappelli” by Annibale Ruccello. She recently played the role of Alice in the movie “Il Sud è niente”, debut of the director Fabio Mollo, who she already worked with in the short movie “Troppo Vento”, winning the award for the best actress at the Fano Film Festival.
She founded the acting company Teatro Primo, where she co-manages the activities of the Theatre Teatro Primo, and supervises many workshops about diction, acting and body expression.