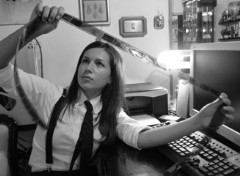 Ilenia Borgia was born in 1985 into a dark and stormy night, as those of Frankenstein Jr.
After spending her first 17 years with Totò, Carlo Verdone, Roberto Benigni, she decides to moving in Cosenza City, where she will undertake the DAMS doctoral studies.
With a first thesis about Television and Media History, and a second about Film Editing Theories and Techniques, Ilenia Borgia specializes about the language of short forms, Author's Trailer and Marco Bellocchio.
She began working with the University of Calabria, the cultural film association Fata Morgana, DAMS and film events organized by them.
She participated in numerous film and TV projects, both as a graphic designer, script supervisor and film editor.
In 2012 she began her collaboration with Pentedattilo Film Festival, participates at a format Rai "48 Hours" and won the film competition "Short Memory - Private Signs ... but not enough" with the short film Postcards From Far Away.
But Ilenia not satisfied about the direction and film editing, just became deeply involved in directing radio and her program: "Reggio Nel Terzo Millennio - Cinema".
Probably, at the moment, she can not provide further information about her life because she's segregated in the Ram Film's Editing Room.