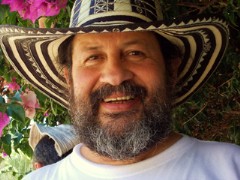 Born in Colombia, in Calabria because of love, he started woking in communication field for Cric's natives.
He arrived in Italy in the '90 and starts working in private television broadcasts as photographer and operator.
As director of photograpy, he worked in many short movies and documentaries.
He is also light designer for theatrical shows and performance.
He directed two documentaries: Samaita Kamari and Ignorant.
He is the president of the Cultural association Sol Latino who organizes the International Documentary Film Festival, of which he's the artistic director.