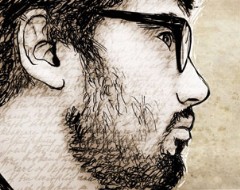 Uncle of twelve nephews, he graduated in Communication at the l'Università degli Studi Siena.
In 2009 he attended a Master Program at Scuola Holden, founded by Alessandro Baricco. He wrote may short movies like Nere Donnole e Alberi colorati, 200 punti, Miki, Piccioccusu.
With the short movie "The Barefoot Humanity", won the Los Angeles Movie Awards 2011.
In 2013, he was selected by the Department of the Youth of the Italian Government to work on a cinema and new media project in Los Angeles, coordinated by the UCLA - University of California Los Angeles.
He writes advertising and music videos.

In 2016 he wrote with Alessia Rotondo the documentary "Made in italy" by Valentina Be°, that open the Fox Life Channel in Italy.
From 2006 he is the artistic director of the Pentedattilo Film Festival.